Born on April 26, 1971, in Norwich, Connecticut, Father Ted Tumicki was raised in the Norwich area, attended public schools in Norwich and Franklin, and graduated from The Norwich Free Academy in 1989. Following high school graduation, he entered Saint Thomas Seminary in Bloomfield, Connecticut, and was a day student at Central Connecticut State University (CCSU) in New Britain, Connecticut. He graduated from CCSU in May of 1993 with a Bachelor’s degree in Philosophy. In September of 1993, Father Ted entered seminary studies at the American College at Louvain and the Catholic University of Louvain in Leuven, Belgium. Father Ted was ordained to the priesthood on July 26, 1997, in Saint Patrick Cathedral in Norwich, Connecticut, by Bishop Daniel A. Hart.

Following ordination, Father Ted served as parochial vicar at Saint Joseph Church in Willimantic and later at Saint Michael Church in Pawcatuck. In September of 2000, Bishop Hart assigned Fr. Ted for further studies in theology and canon law at the Catholic University of Louvain in Belgium. Father Ted earned a licentiate degree in sacred theology (S.T.L.) in June of 2001 and a licentiate degree in canon law (J.C.L.) in July of 2003.

In August of 2003, Father Ted was assigned as priest secretary to Bishop Michael Cote, Bishop of Norwich, with part-time duties as Bishop’s Delegate for Safe Environments and as a judge on the Diocesan Tribunal (Church court). From September of 2005 to June of 2011, Father Ted served as temporary administrator and later pastor of Saint Joseph Church in Occum.
In June of 2011, Father Ted was appointed pastor of three parishes: Saint Mary Parish in Jewett City, Saint Catherine Parish in Preston, and Saints Thomas and Anne Parish in Voluntown. He is also the Judicial Vicar of the Diocesan Tribunal and serves on several boards and committees, including the diocesan Presbyteral (Priests) Council, the Diocesan Pastoral Council, the Diocesan Review Board, and the Policy Review Board. 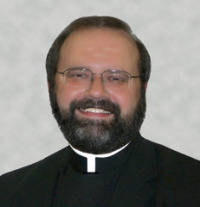